Does the Wild West warning work?

A mandatory warning on investment propositions with light touch regulation turned out to be effective in altering willingness to invest in a randomized experiment, especially among potential retail investors who were previously not aware of this warning.

Since 2012, a standardized warning in a fixed format is mandatory for advertisements of retail investment offerings that fall outside AFM’s retail supervision. In a randomized experiment, we investigated the effectiveness of this mandatory warning ‘Let op! U belegt buiten AFM-toezicht. Geen vergunning- en prospectusplicht voor deze activiteit’ [Watch out! You are investing outside of AFM-supervision. No license or prospectus obligation for this activity].

We conducted our research with respondents in the AFM Consumer Panel. We focused on a select group that self-reported as having liquid assets over €100,000. These consumers are potential investors in products that are exempt, because offering securities worth at least €100,000 each qualifies for an exemption. We showed respondents online mock advertisements that only differed in the absence or presence of the mandatory warning.

In our first experiment (N=1,308, N=317 with assets over €100,000), we also established after the experiment whether respondents were familiar with the warning. Over half of our respondents with assets over €100,000 (58%) were, which was substantially higher than investors with less than €100,000 in assets. Overall, about one in three investors is familiar with the warning.

In the actual experiment, respondents were randomly divided in four groups and shown different versions of a mock investment proposition. These versions included three different versions of the warning (prospectus exemption, license exemption, or exempt for both) and a mock investment proposition without a warning. Respondents were randomly assigned to an experimental group. A second experiment (a replication with N=301 respondents with assets over €100,000) only compared the “no license obligation” versus an ad without a warning.

Higher intention to invest without warning

The figure shows the results of the first experiment. The left part of the figure shows the intention to invest in a proposition with or without warning, for respondents who either did or did not know the warning previously. Averages are shown with standard errors. The right panel shows the distribution of answers for the “no warning” version, split out between respondents that did, and did not, know the warning. 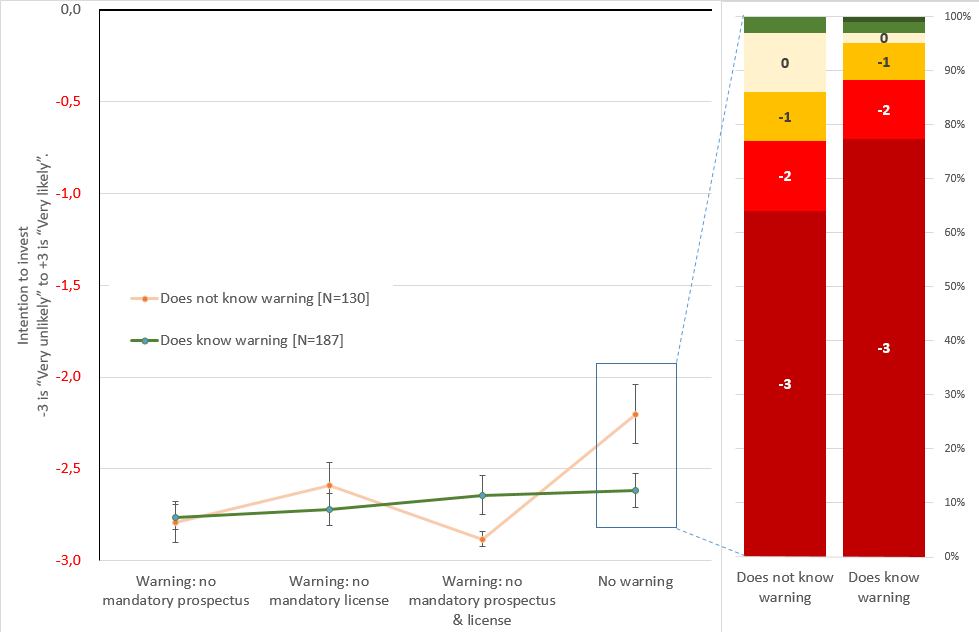 The randomized controlled trial concluded that absence of the warning led to a higher intention to invest, especially for wealthy investors did not know the warning beforehand. We did not measure effects on actual investing behavior. The effect of the message seems in line with the goal of the warning, namely protecting consumers by pointing them to their greater personal responsibility when investing in these kinds of products.

This randomized controlled trial shows that it is useful and feasible for supervisors and regulators to test whether their interventions are (potentially) effective. Insights from behavioral sciences can provide a useful starting point for this testing. Examples such as this case, strengthen the AFM in her resolve to apply behavioral insights.

This blog post is based on a peer reviewed article in Dutch, which was published in 2017 in Tijdschrift voor Toezicht (Journal of Supervision). That article also was awarded the 2017 Best Paper Award by VIDE, the Dutch association for supervisors, regulators, inspectors and audit professionals.