Prefilling income and expenditures has large and unwanted effects on telephone credit applications: a field experiment

Mobile phones in the Netherlands are often sold in combination with a subscription. This combination is offered for a fixed monthly fee. Costs for the phone are often paid off over 12 to 24 months and are thus considered consumer credit. The Dutch Authority for the Financial Markets (AFM) supervises telecom providers and other credit providers based on the Financial Supervision Act. Section 4:34 of this act states: “Before concluding a credit contract, an offeror of credit shall, in the consumer’s interest, obtain information on the latter’s financial position and assess, in order to prevent overextension of credit to the consumer, whether concluding the contract would be justified.” Mobile phone providers often assess consumers’ financial position by means of a prefilled application form so as to reduce consumer effort. Literature on anchoring suggests this may have a steering effect on behavior (e.g. Furnham & Boo, 2011). Using a field experiment, we test whether the prefilling of income and expenditures affects consumer’s answers, and might cause them to obtain unsuitable credit.

To prevent overindebtness, telecom providers must assess credit-worthiness. For phones costing between €250 and €1000, self-reports by the customer are sufficient. Where some providers rely on application forms with empty fields that consumers have to fill in, other providers used an online form with prefilled amounts for income and expenditures. These prefilled amounts can for example be based on averages of other customers, or on minimum values to qualify for the loan. The AFM expects credit providers to offer a choice architecture that put customers’ interests first. Due to anchoring and the effect of defaults (e.g. Smith et al, 2013, Furnham & Boo, 2011), prefilling income and housing costs might lead to customers providing incorrect answers. This can be both because of conscious processes (for example by taking the prefilled answers as a recommendation) and unconscious processes (for example because of insufficient adjustment of the suggested amount).

Experiment on the effect of prefilling on reported income and expenditures

To test how the choice architecture (with or without prefill) affected the amounts people reported, we conducted a randomized controlled trial with a telecom-provider involving N=2,546 actual applications of (potential) customers in June and July 2017. Website visitors were randomly assigned to a condition with prefill (N=1,342) or without prefilled amounts (N=1,204). The application form inquires web visitors about family composition (single/with partner, with or without kids), and their income and expenditures (predominantly housing costs). Different family compositions have different prefilled amounts for income and expenditures. Whether a web visitor is an existing or a new customer, is also known.

The final report in Dutch [press release] reports prefilling amounts led to 20.5 %-points more reported incomes within a 5% range around the prefilled amount, and 15.8 %-points more reported amounts close to the prefilled amount of expenditures. For a subsequent analysis, we obtained the micro-data of these applications and analyzed the effect of prefilling. Note that this data set differs from the data set on which the original (Dutch) report was based as it is micro-level data and includes a larger amount of applications. Results therefore differ slightly from the original report, but the conclusions remain. Figure 1 shows a normalized, smoothed kernel density plot for both reported expenditures (left) and income (right). Both plots show a large peak for the prefilled condition at the position where the amount provided by the customer equals the prefilled amount (x-axis = 1). In other words, many consumers followed the prefilled amounts. The income plot on the right also shows many more amounts below 1 for the non-prefilled condition. This suggests that the prefilled, reference amount had an uplifting effect and causes reported income to be higher. In addition to the effect that people stick with the suggested default, the prefilled default seems to entice people to provide higher incomes than the non-prefilled condition. The expenditure plot on the left indicates that the non-prefilled condition is evenly distributed on both sides of the peak. For expenditures, we therefore do not observe a pattern similar to the strategic overstating of income that we observe with prefilled-income situation. 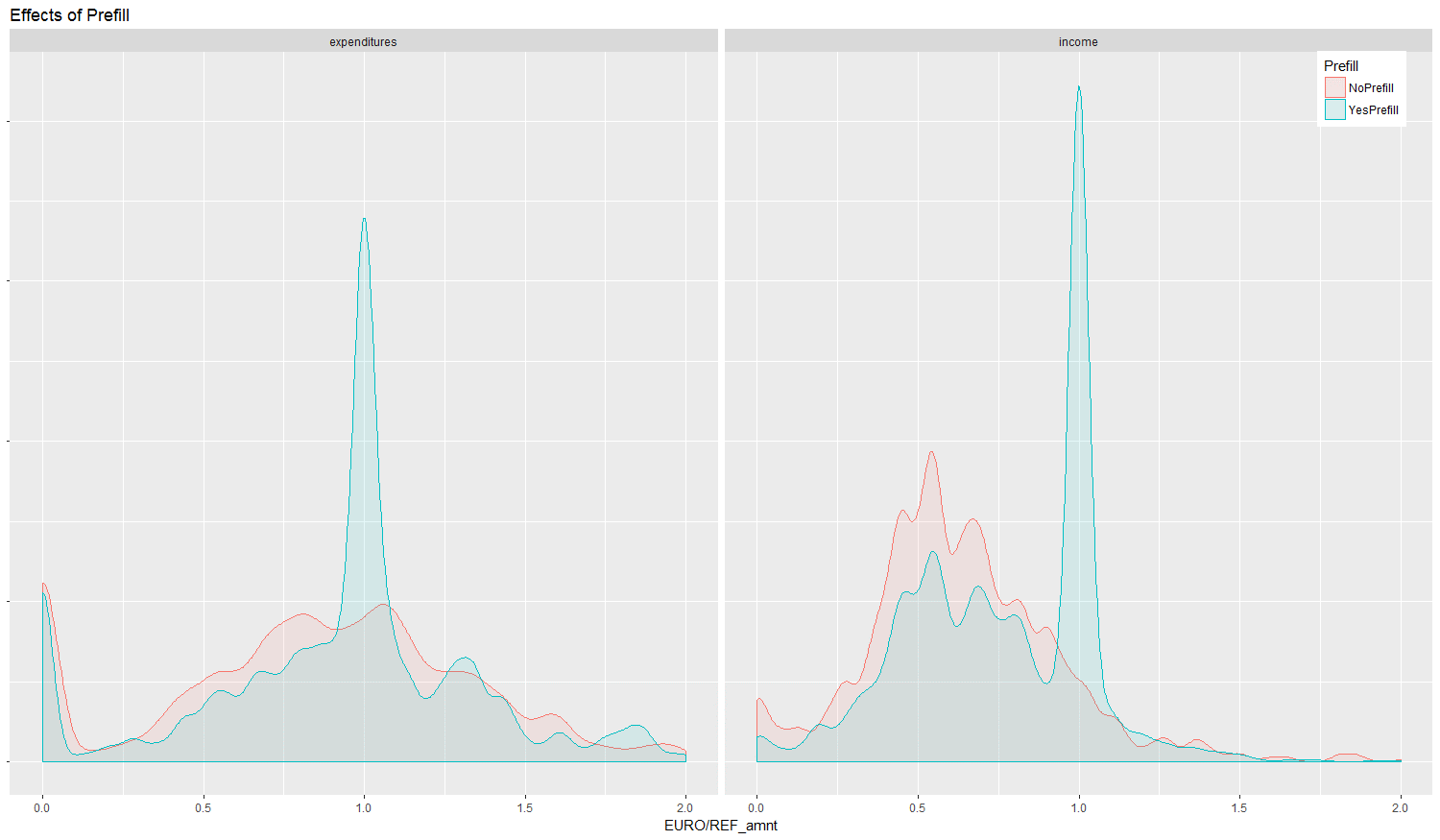 Logistic regressions (Table 1) indicate that people in the prefilled condition are almost six times as likely to state that their income is within close range (within 5%) to the prefilled amount, than people from the non-prefilled condition. Reported income amounts are also slightly (but significantly) more often within the vicinity of the prefilled amounts than expenditure amounts. A similar trend was seen for new customers (as opposed to existing customers), but here the difference was not significant.

Family composition generally did not affect the relation between stated and prefilled amounts. With the exception of singles with kids, who were significantly more likely to answer within the prefilled range.

Table 1: results for logistic regression on dependent variable “amount within 5% of prefilled amount"

Prefilling thus has a very strong and distorting effect on the amounts customers report when applying for a loan for their phone. The prefilled amounts seem to be regarded a standard option, with some sort of implied advice. Resulting in a 15 – 20 percentage point shift to prefilled amounts. There also seems to be an inflating effect of prefilling for income, i.e. people reporting mainly higher incomes than what would be expected from the non-prefilled condition. For expenditures, the distortion seems more symmetric; the peak for the prefilled amount here draws from both sides of the distribution. Whether or not the loan is suitable for a specific customer is harder to ascertain when they are guided by prefilled amounts. To prevent improper credit provision, and to create a level playing field for providers, the supervisor AFM has ordered prefilling to be stopped and all providers have complied with this request. No income and expenditures assessments for telephone credit are done with prefilled amounts in the Netherlands.